Computing the Mode in a Multimodal dataset

Home/Computing the Mode in a Multimodal dataset
Previous Next

Computing the Mode in a Multimodal dataset

In a recent project in which I participated, one of the main metrics the user wanted to visualize involved mode values. I will write about some of the complexities we encountered while implementing it, but before diving into it let’s remember what a mode value is.

In the above example, we can see that the value which appears the most is the number 3, with a total of three instances.

QlikView has a built-in function to calculate the mode value in a given dataset. For instance, if the field containing the values we want to evaluate is named Grades, then we would use the following expression to obtain its most occurring value:
Mode(Grades)

More than one mode?

Now comes the tricky part. Given the following dataset, which value would the Mode() function return?

We now have two values which occur the most (numbers 5 and 3), both with equal number of instances. This dataset is called a bimodal dataset, since there are two mode values. The problem resides in the fact that the Mode() function will return null whenever there is more than one mode value. Our user required QlikView to handle these instances differently: returning the lowest of the mode values. So, in the above bimodal dataset, we would return the number 3.

To approach this, we discarded the Mode() function and built our own modified mode expression. Once our expression was created and properly tested, we stored it into a variable with parameters to make it more versatile and serve as if it were an actual function, with the ability to call it from different charts. I will now explain in more detail how we achieved this.

Calculating the mode, step by step

To illustrate, suppose we are working with the dataset of a University, containing the different Grades obtained by the students across several courses. The steps required to calculate the mode value are: first, we obtain the frequency of each Grade value in the dataset. Then, we pick the one that occurred the most. If there is more than one highest-frequency value, we pick the lowest of those values.

We can visualize this in the following straight table: 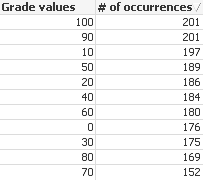 As you can see, the two mode values are 100 and 90, each occurring 201 times. The second step would be to pick the lowest value. Since 90 is lower than 100, our modified mode function should return 90.

I’ve used a straight table with the Grade field as dimension and Count(Grade) as expression, and manually sorted the table based on the second column, in descending order. We will now calculate this same value, but without using the straight table. Enter the Aggr() function. We can use the following expression:

What the above expression does is:

Now, we’ve covered the basics behind the modified mode expression, but that’s not the final solution. In order for us to accurately use the Aggr() function inside a Chart, we need to take into account the dimensions used in the chart.

For example, we’ve seen that the most frequent Grades occurring in our entire dataset are 100 and 90. But maybe we want to visualize the most frequent Grade by Class, or by Semester, or by Professor. In that case we’d need to obtain a different “max occurrences” value for each subset of the data (for each Class, for instance), and then compare each individual Grade value within that subset to its corresponding subtotal.

So, now the above expression should be modified to the following:
Min(Aggr(If(Count(Grade) = Max(Total <

We can compare the values resulting from the built-in function and the ones from the new modified expression with the following chart: 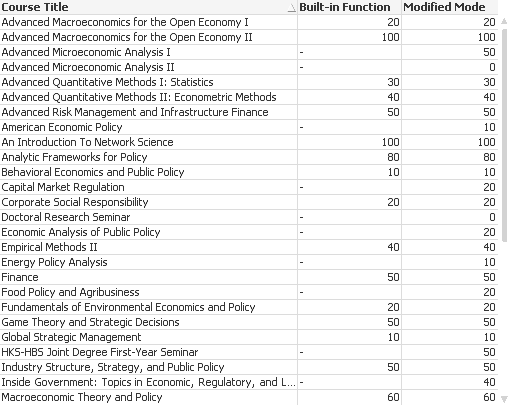 The advantage is clear: while the built-in function returns null for some courses (bimodal subsets), our new expression returns the lowest of the mode values.

Similarly, our chart could contain more than one dimension at the same time. We should add all dimensions used in the chart to the Total qualifier, as well as to the two Aggr() functions. Otherwise, our results would be inaccurate.

Once our expression has been built, and after we’ve identified the different scenarios in which it could be used (i.e. No dimensions, 1 dimension, 2, etc), we can store it as a variable and add some parameters to make it re-usable regardless of the number of dimensions used, or the name of those dimensions. This approach will also help us manage our expressions centrally.

We can create a variable, name it eModifiedMode, and define it as follows:

Additionally, each of the listed expressions expects the corresponding fields across which the aggregation should be made. This is specified with the remaining parameters ($2, $3, $4).

To illustrate, suppose we have a straight table with two dimensions: Semester and [Course Title]. To calculate the Grade which occurs the most for each row, we can call our custom function as follows:
$(eModifiedMode(2, Semester, [Course Title]))

The three parameters we have used to call our variable are:

If we had an additional dimension in the chart, Faculty for instance, then we’d call our variable as follows:

Finally, there are some considerations we have to take into account when using this approach, let’s discuss some of them.

When using this approach, we must take into account the fact that, since it is not a built-in function, it might not perform as optimal as we’d expect. There are several steps the computation has to take to arrive at the final result. However, when implementing this with our customer, we were able to see that response times were still acceptable in a ~100-million rows app.

In the end, we decided to implement a mechanism to allow the user to select if he wanted to consider the multimodal nature of the dataset in the calculation or only use the “natural”, built-in function. This made sense as there were only a few, rare instances in which the dataset became multi-modal.

Another way of approaching this could have been to pre-calculate everything at script run, and use simple aggregations in the front end. However, we discarded this option as it would mean to limit the functionality of the app. By calculating the result in the front end, we allowed the user to filter the data in whichever way he decided, with no restrictions, and the result will always consider those selections. At the end of the day, that’s one of the advantages of QlikView: ad-hoc querying and no need for pre-aggregates.

The example I have described uses the Min() function to retrieve the lowest of the mode values (when there is more than one). However, the expression could easily be extended to use different operations: Min, Max, Avg, etc. This could be implemented using an island table, for example, but since this has been a long post, I will leave that up to you to explore.

If you would like to explore this approach first-hand, you can download the example app by clicking here.

To know more about expression variables, the use of variable parameters and advanced expressions, be sure to check out our book: QlikView 11 for Developers.