It’s time for a new post, and today it is a very special one. QlikTech has released a beta version of the new “AJAX Touch Client” and I think it is major news and will give QlikView a big bump in the mobile filed.

If you used the QlikView mobile client before, whether on an iPad, iPhone or Android (no longer available, by the way), you know that the mobile version of QlikView was designed to show one single object at a time. That was OK, since mobile devices have a limited screen space and if you wanted to see the complete set of objects in a sheet, shown at the same time, you needed to zoom in to actually view the numbers.

With the release and ever-increasing availability of the iPad, customers started to notice that seeing only one object in the almost 10-inches screen space was just not efficient. Some of them even preferred to open Safari and just go to the QlikView AccesPoint as they would in a normal PC/Laptop, and my opinion is that there was not a lot of functionality lost when using this method, although it wasn’t the best navigation experience either. So there are the two main problems with the previous mobile client:

So, QlikTech made a move towards perfecting the mobile experience and created the AJAX Touch Client, which uses the same technology we already know (AJAX), but now with multi-touch capabilities when accessing via an iPad or iPhone. Support for other touch devices has not been included yet, as stated in the release notes.

Now, some of you may recall the “Universal Touch Client”, which I believe is under development still, and I need to mention that this is not the same. You will soon see the difference.

So, here is my review after testing the client on an iPad.

Review of the AJAX Touch Client

If you are a registered partner, and go to the downloads page, you will see this message:

So, you need to download the “iPad Patch”, which is build 8837, to test it in your own server. I tested it in my laptop, and there was no problem installing it, no extra configuration needed. However, for the purposes of these review I made use of the demo.qlikview.com server, since I noticed they already have it running, so all the screenshots you will see are from an iPad connecting to the demo server.

The first thing I noticed is that the toolbar and the Tabrow are a little bigger, to allow for an easier navigation. 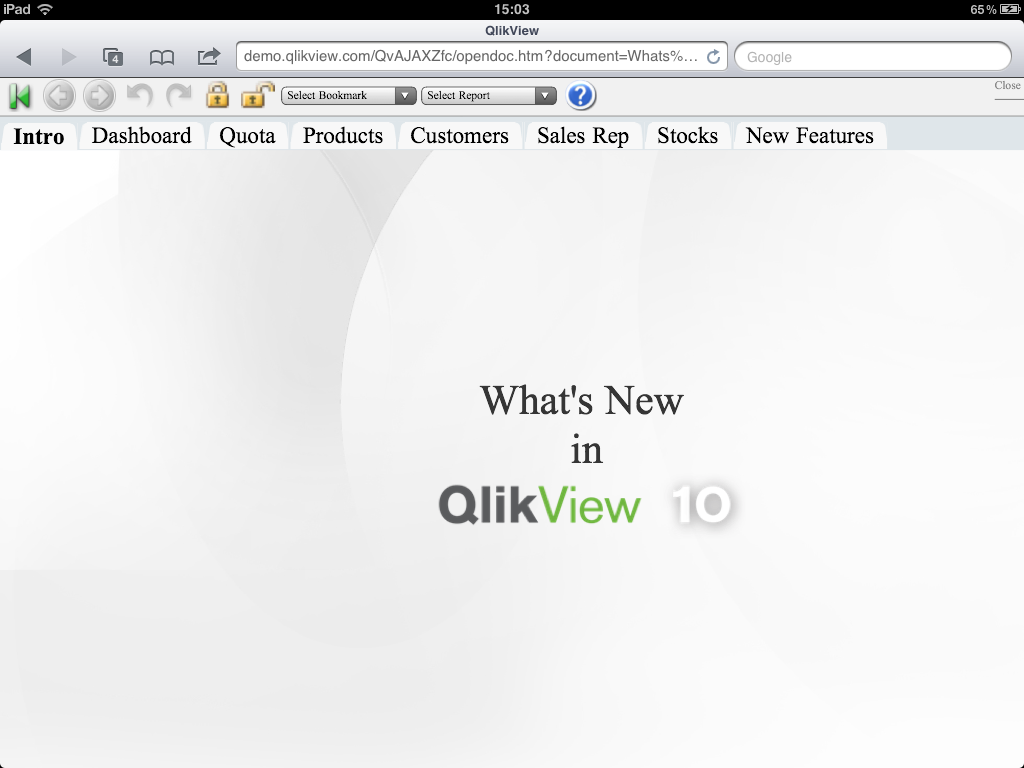 When you enter a sheet that has analysis objects and list boxes, you’ll see that all of them have a little down-arrow as another icon in the caption bar. That’s the contextual menu and simulates a Right Click. All of the objects that have a caption bar have this new icon, whether it is enabled in the original desktop app or not. 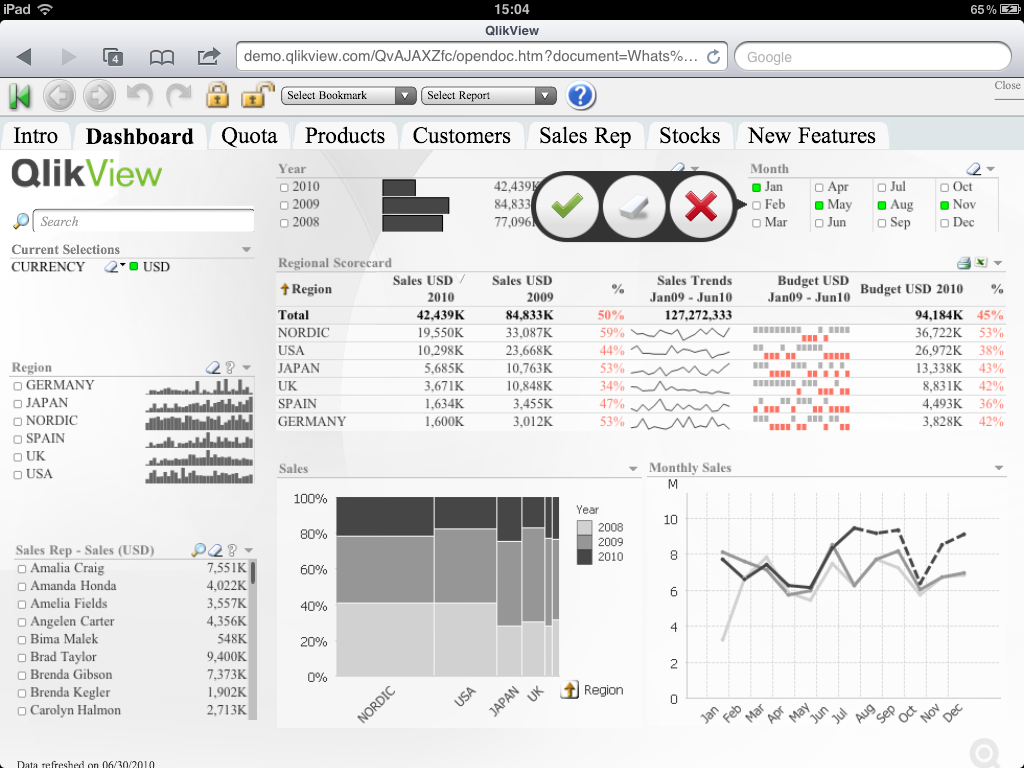 The way the new client handles the Associative search was a little difficult to use in my tests, but maybe it’s one of the things they will improve, I hope. 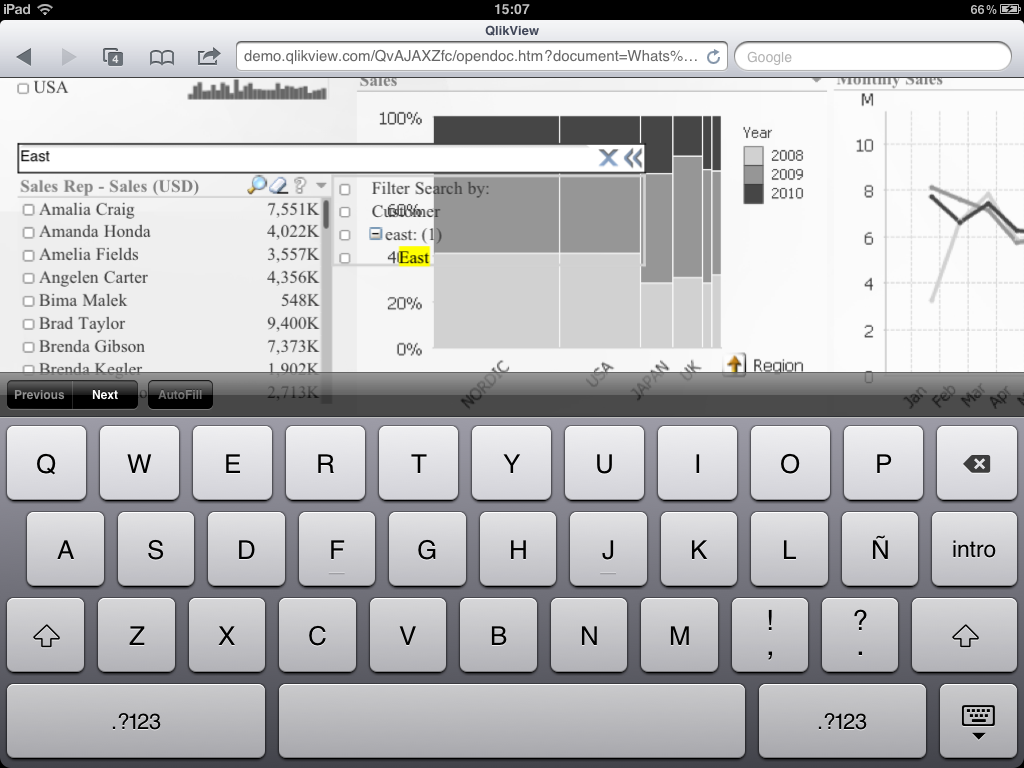 Yo can also disable the associative search if you want to search only in the List Box’s field. Do so by tapping on the two left-arrows in the search field. 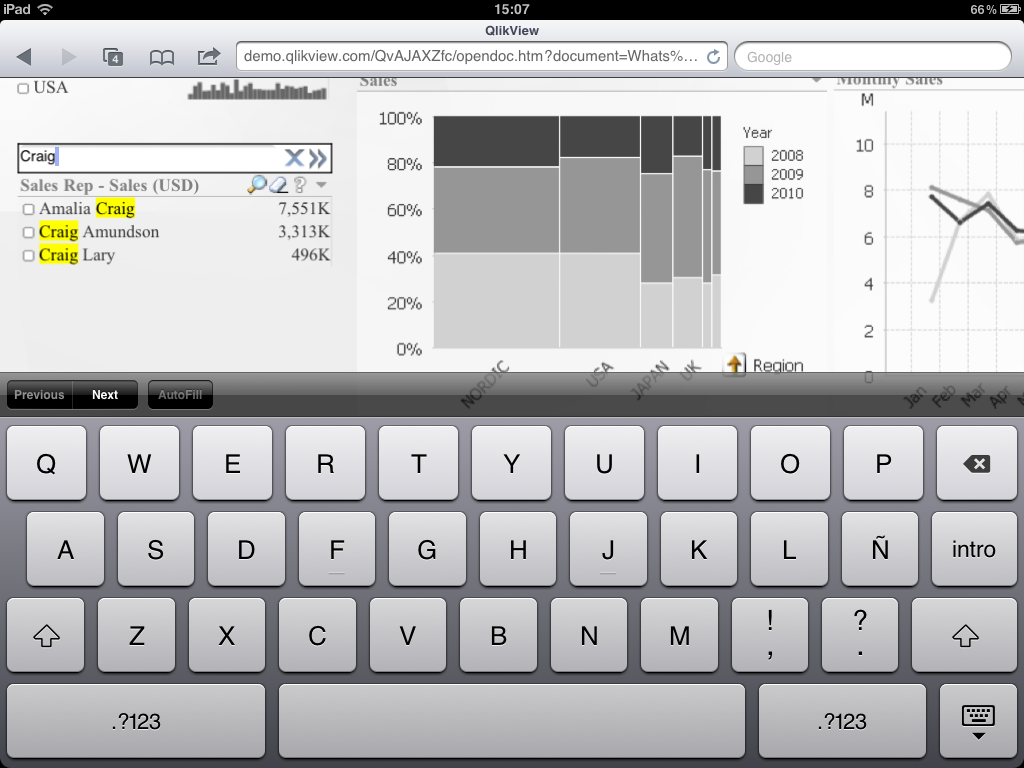 You can also make selections in the chart objects by tapping for a few seconds inside the chart area. You should see two buttons pop up. 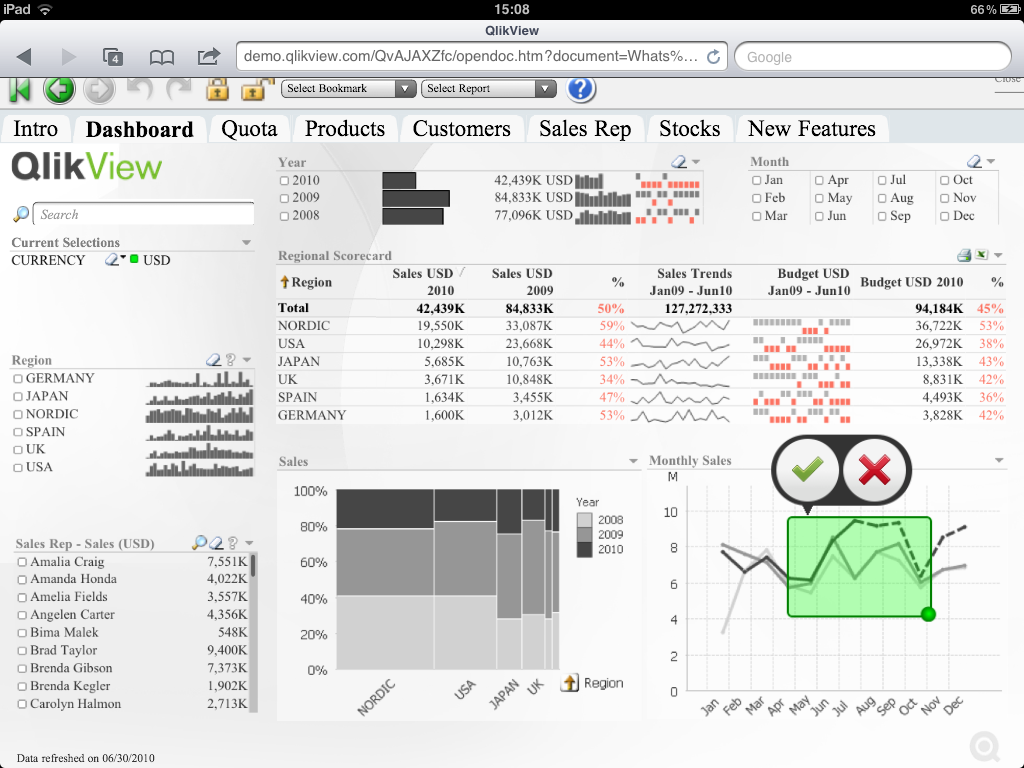 You can also scroll on any table (Straight Table, Pivot Table or Table Box) and List box that has more values that can be shown on the object area. You just scroll as you would any other webpage, just slide the object area. 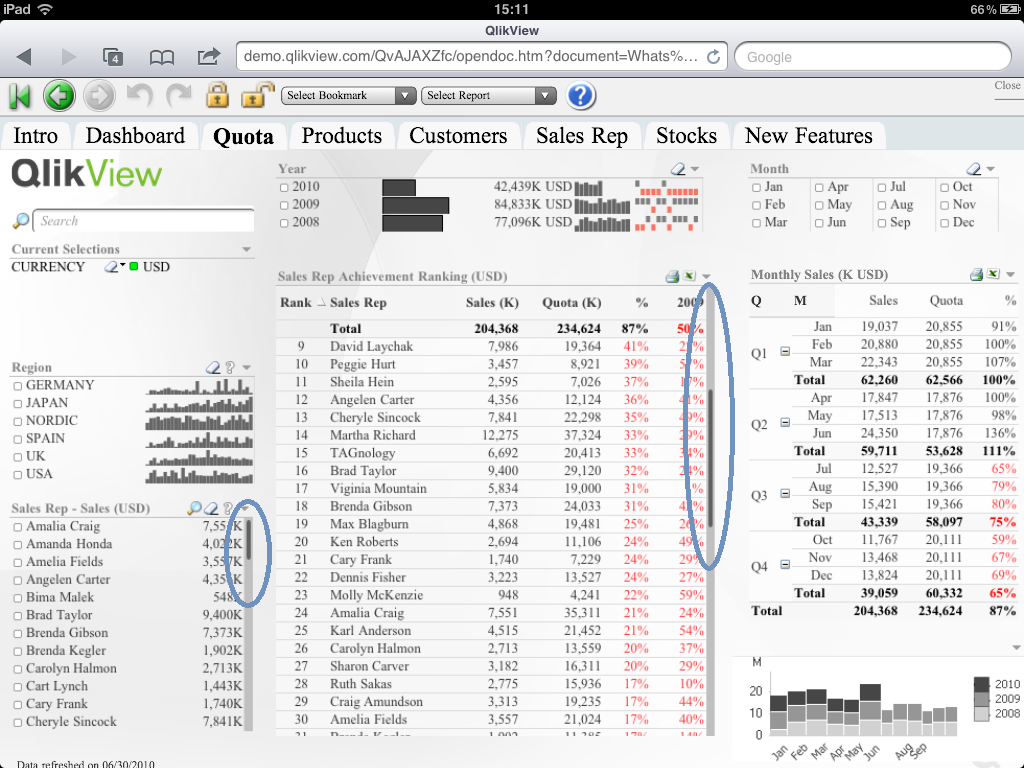 You can also make selections using the Current Selections Box, by tapping the down-arrow next to the field name. 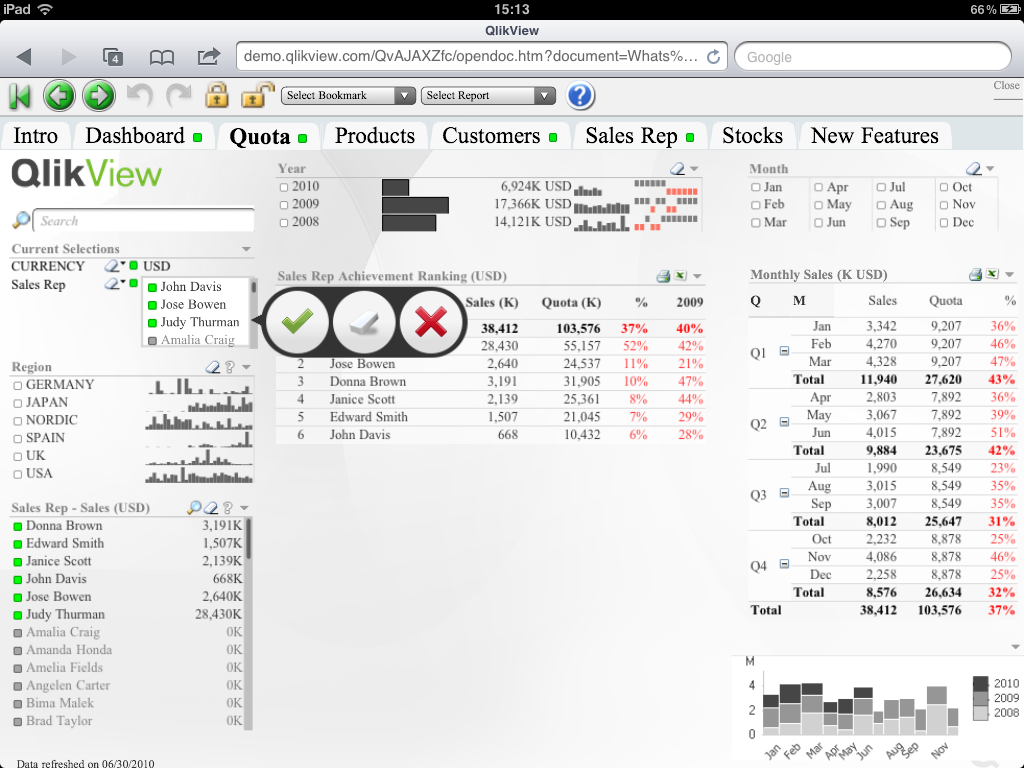 If you click on one of the tollbar options that displays a dropdown, you will not view a normal web dropdown but one that uses the iOS features, functionality and style. 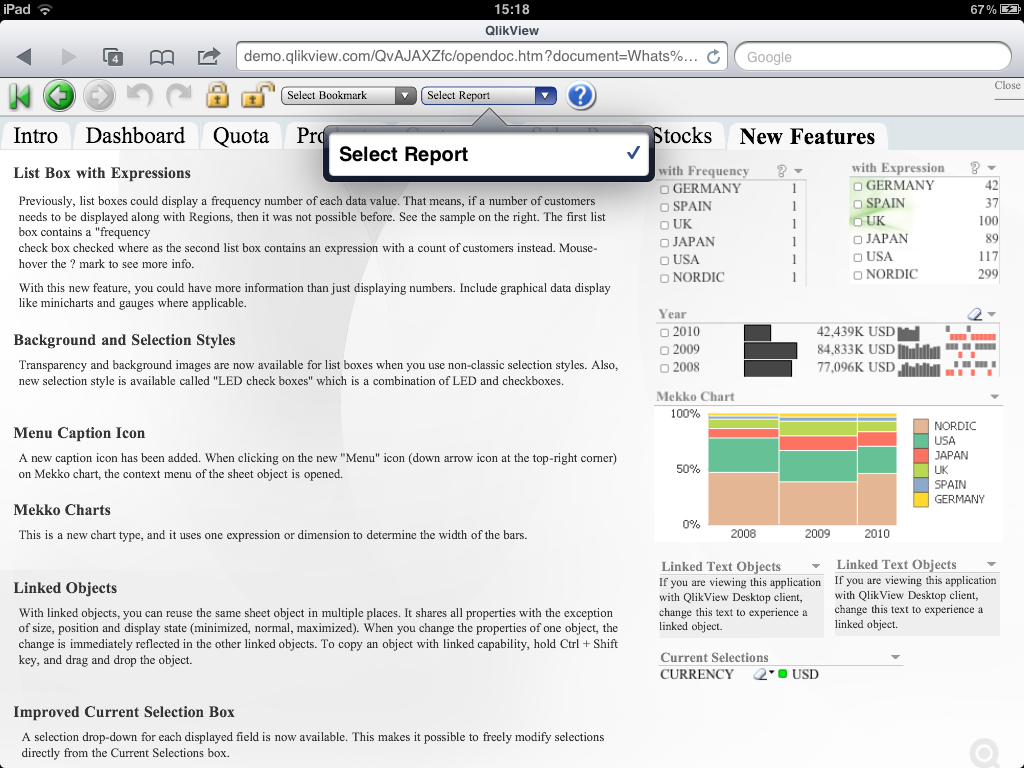 This is maybe not a new functionality, but it’s worth noting. If you click on the Export to Escel icon on a Chart, Safari will open a new window to show you the content of the created xls file. This file is created on the Server Side, so you can just e-mail the link to the file so you can open it later in your PC and save it. 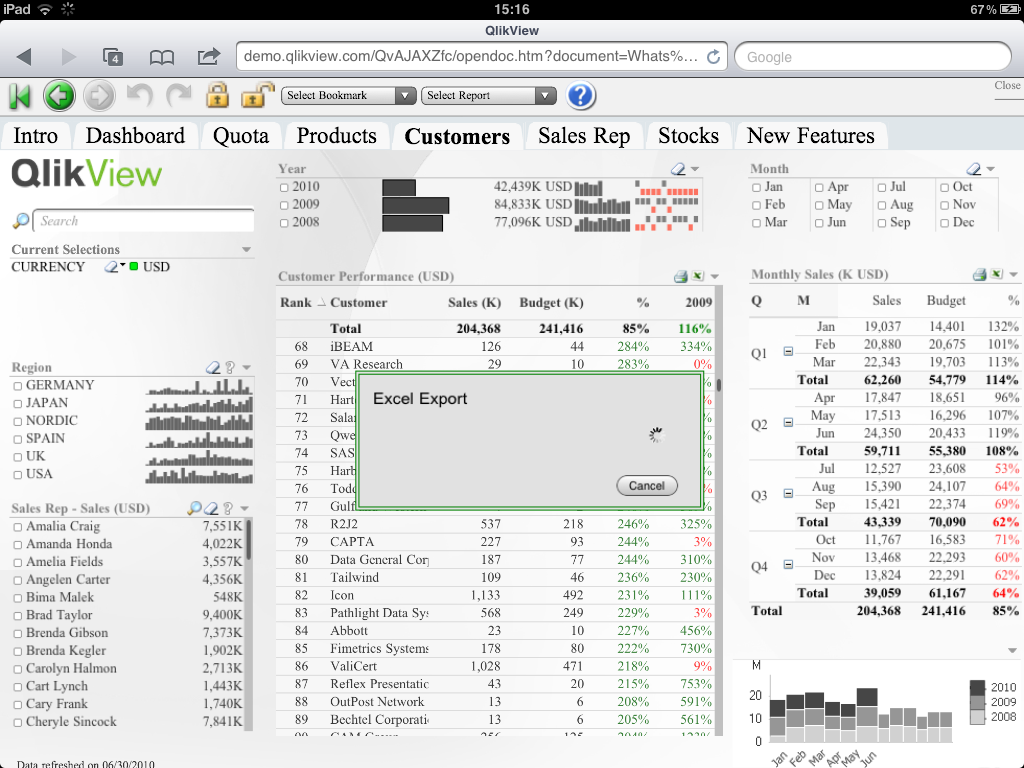 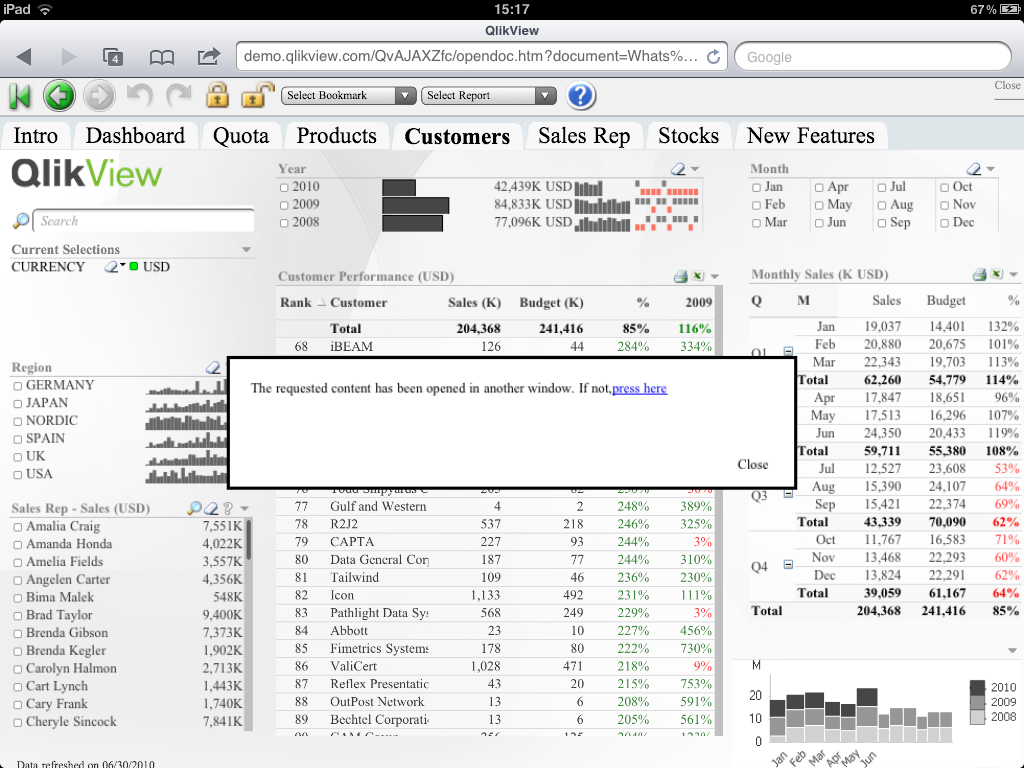 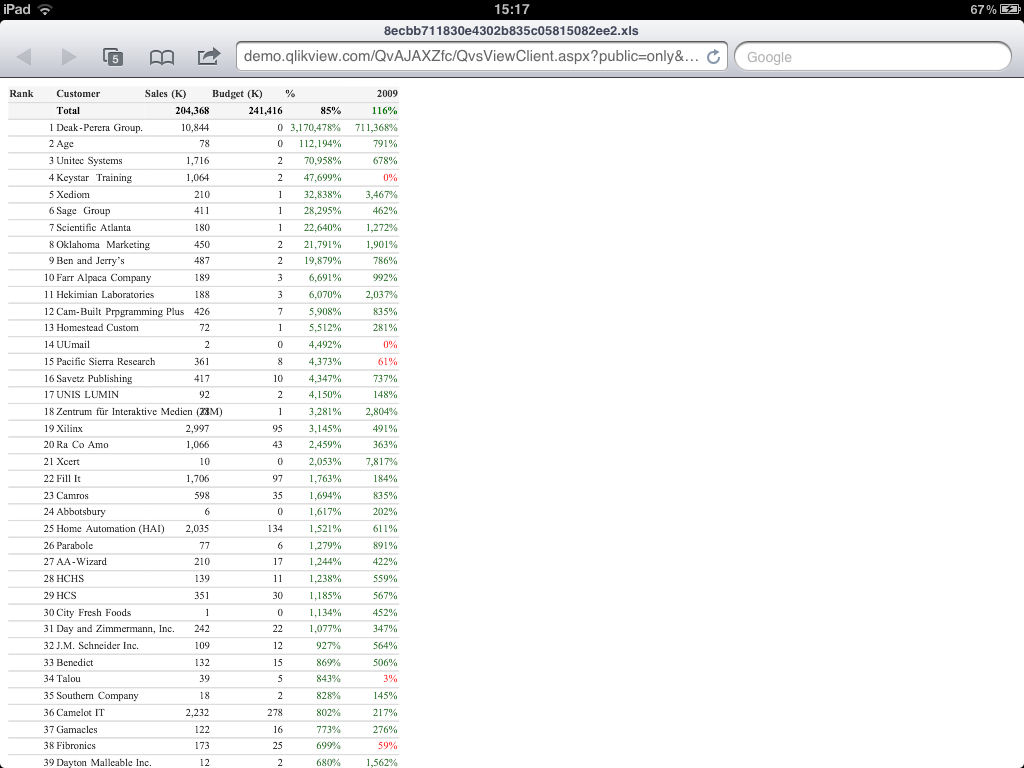 I also noticed that it is possible to click on buttons that trigger different actions, something wich I remember was not possible using the normal AJAX client on a touch device.

I also noticed a few things that are not possible yet:

So, what do you think about the AJAX Toudch Client? Do you have a customer that wants something like that? or are you one yourself?